I really wish I could stop with the spill articles. Really, I do.  I know I’ve gotten the point. But apparently the oil companies haven’t? So I will keep posting.

The piled up spill articles since the 12th.

So I’m going to start you with this link. It has an awesome video clip from Rachel Maddow.

“Aside from just a normal curiosity about how big of a mess there is to clean up, pinning down the number of barrels spilled has important financial implications:

Estimating the size of a spill in the first days after an accident can be contentious, because the volume of the spill affects the fines and penalties companies may eventually pay for violating the Clean Water Act. Fines can be as high as $1,100 for every barrel spilled. If gross negligence or willful misconduct is proven, violators can be forced to pay as much as $4,300 per barrel.

And the true size of the spill could be even larger:

Exxon says it shut down the pipeline within 16 minutes of detecting a pressure drop last Friday afternoon. The line continued to leak for 12 hours as it lost pressure, according to the PHMSA corrective action order. Two valves 18 miles apart were shut to isolate the leaking section of pipe. If full, the 20-inch pipe would contain about 36,000 barrels of oil, or more than 1.5 million gallons.”

I think one major thing we can take away from this is to pay attention to where we fill up our tanks and boycott Exxon. If the government will do little more than a slap on the wrist we can at least take a chunk of their profits.

“While it’s not clear if the oil was intentionally moved into the wetland, the company says it is cleaning pavement with power washing devices, which could cause some of the oil to be pushed off neighborhood streets and into other areas.”

Yeah. let’s power wash the oil off the pavement which is made of crude oils already and let it infect the earth some more. Good plan.

Yeah, let’s put some paper towels on it.” This isn’t your kitchen! Be productive and FIX it!

“This stuff is not crude oil,” he said. “It’s a lot more dangerous than crude oil. It’s harder to clean up. Crude oil floats so you can scrape it off the top of water or get it with a boom. Dilbit — diluted bitumen, or tar sands — sinks, so it can never really be cleaned up. We’re seeing from the Kalamazoo River spill of 2010 that it still isn’t cleaned up. People are still sick. People are still getting sick.”

Thanks to Ladyocean420 for sending me this link.

“The state sought $236 million to monitor and remediate groundwater contaminated by MTBE — which travels farther and faster in groundwater than gasoline without the additive.

Lawyers for Exxon Mobil say the company used MTBE to meet federal Clean Air Act mandates to reduce air pollution and should not be held liable for sites contaminated by unnamed third parties, such as junk yard owners and independent gas station owners.

Jurors had more than 400 exhibits to sift through, including memos and reports dating back decades.”

Decades. DECADES people! Follow the link for a slide show of other spills. Maybe we should all just start hoarding all the good water now. It seems it’s going to get harder and harder to find it. 😦

“Despite spilling tens, if not hundreds of thousands of gallons of oil and chemicals into an Arkansas neighborhood, thanks to a loophole in a law from 1980, ExxonMobil will not be paying into a federal oil spill cleanup fund because the oil they spilled is not the right type of oil. It is a twisted example of the legal technicalities and lax regulations that all too often favor oil companies, but a coalition of environmental groups are working to close the loophole. According to Congress and the IRS, diluted bitumen or dilbit, which is the type of oil that has spilled in Arkansas, is not classified as oil and companies shipping it are not required to pay an 8-cents-per-barrel excise tax into the federal Oil Spill Liability Trust Fund, as companies shipping conventional oil do. According to the oil industry, tar sands oil is oil when the oil industry needs oil spill cleanup funds, but it isn’t oil when it comes to paying for that cleanup fund. The industry also opposes changes to how tar sands oil pipelines are regulated. So again, they consider tar sands oil just like conventional oil when it comes to their pipelines, but not when it comes to cleaning the spills those pipelines create.

So while the Oil Spill Liability Trust Fund will be tapped to clean up spills of tar sands oil, like the Arkansas spill, because of this loophole, ExxonMobil and other oil companies dealing in tar sands dilbit are not helping replenish these funds.

If the oil industry wants to pipe these dangerous tar sands oils over our water sheds and aquifers, putting our drinking supply and neighborhoods at risk, they should not only be required to pay into the cleanup fund, they should be paying far more than the 8 cents per barrel they pay for conventional oil since these tar sands oils are not just worse for the environment, but potentially pose a greater risk of spills and are even harder to clean up.” 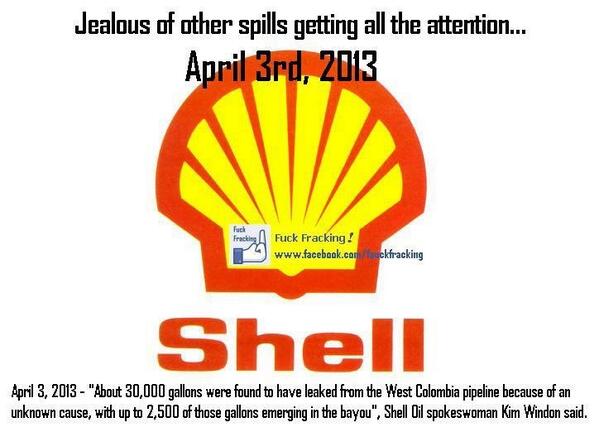 But hey! On the bright side Exxon is cleaning up their mess!

“Company workers wearing logoed shirts roam throughout the town. Local police guard the entrance to the neighborhood where the spill happened. On Starlite Road, where oil flowed down the street last week, workers vacuum up oil in yards and steam-wash pavement. The oil company has also taken over wildlife rescue from a local organization; independent rescuers report that they are being forced to leave private property by ExxonMobil enforcers. (Casualties so far include oil-covered ducks, snakes, and nutria.) Reporters who accompanied Arkansas Attorney General Dustin McDaniel on a tour of the spill on Wednesday were asked to leave by Exxon representatives. Even the state Department of Environmental Quality refers reporters to the Exxon downstream media line for information. Lisa Song at Inside Climate News was one of those journalists threatened with arrest after she went to the command center for the cleanup operation in an attempt to reach an Environmental Protection Agency and the Department of Transportation official for an interview. Elsewhere, “an activist indy news team” duo called JNL, has been using Ustream and Twitter to report from Mayflower and interview local residents. Yesterday, they were detained by police and forced to leave private property where they were reporting from, despite having permission to be there.” Follow the link for videos.

So if one follows the mind set of the Zeitgeist movies (and I’m pretty sure I am right now since I watched Addendum yesterday) This was all on purpose. What better way to keep resources limited than by making them less viable? People not feeling well? That’s just a bonus! Think of the money they’ll have to spend to combat the symptoms they’ve just acquired.  Then they can continue to charge what they have been if not raise the prices. Keeping themselves nice and cozy.